Someone the other day posted that I don't know how to write.

Another woman with a "Masters in English" (which she emphasized) trashed my book How to Retire Happy, Wild, and Free. 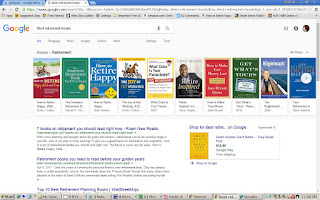 You can see the list at Best Retirement Books on How to Retire Happy.

Below are some of the entries:


First in September 2014 the AARP posted the article 6 Retirement Books You Should Read Now on their AARP website. The AARP placed How to Retire Happy, Wild, and Free (now over 390,000 copies sold) in the Number 6 Position although it has out sold all the other retirement books since it was released in 2003. 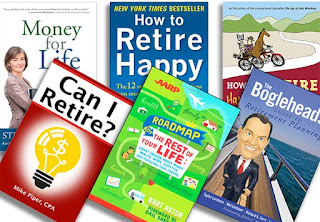 Along with some of the other World's Best Retirement Books, here are more of the many places where How to Retire Happy, Wild, and Free is highly recommended by major media or bloggers, including US NEWS, USA TODAY, Wall Street Journal, Washington Post, and Christian Science Monitor:

1. 10 Great Retirement Books by Steve Holbrook of USNEWS: In this article US NEWS lists How to Retire Happy, Wild, and Free in the Number 1 Position.  "In How to Retire Wild, Happy, and Free, life coach Ernie Zelinski advises retirees on how they can relax and enjoy their lives. From retirement savings to envisioning your retirement goals, Zelinski offers guidance on a broad range of topics."

2. 7 BOOKS ON RETIREMENT YOU SHOULD READ RIGHT NOW BY REBECCA BOWSLAUGH:(Note that How to Retire Happy, Wild and Free is Number 1.) "Many retirement books focus on the financial side of retirement; specifically how much money you’ll need before the big day arrives. How to Retire Happy, Wild, and Free is something different. This book focuses on life (and how to live it!) after retirement. It encourages physical, emotional, and spiritual well-being and improvements and helps the reader set goals to achieve a better life. And Zelinski is Canadian, so his humourous advice is not only relevant, but also practical. His is also the author of The Joy of Not Working: 21st Century Edition – A Book for the Retired, Unemployed, and Overworked an equally humorous and inspiring book for retirement and potential retirees."

26. 10 Best Selling Retirement Books on Amazon: by Knowing My Retirement.com: NOTE: How to Retire Happy, Wild, and Free is Number 1. Here "are 10 of the best selling books from AMAZON.COM on the non financial aspects of retirement. They are ranked starting with the most popular. We reviewed about 108 titles to develop this list. So for AMAZON, financial retirement books outnumber non-financial ones by about 10 to 1, pretty much the state of the art for retirement information."


27.  10 Books to Read Before You Retire: By Jeff Somers January 2018: More Best Retirement Books of All Time: Some people dream of retiring and living a jobless life. Others want to work until they fall over. No matter which camp you fall into, retirement planning is essential.


30. Early Retirement Books by Todd the Financial Mentor: (Invest Smart. Build Wealth. Retire Early. Live Free.) Most people dream about early retirement, but few make concrete plans and take the required actions to achieve the goal. Readers on this site are different. I’ve have made it my mission to teach the methods I used to retire early at age 35. I’ve taught these same principles to 100’s of coaching clients with great success. The truth is anyone can retire earlier than old if you’re willing to commit to the goal, create a plan based on proven principles, and take persistent, consistent action. Surprisingly, it’s really not that hard when you know what to do. Here are several books that give you different perspectives on early retirement including How to Retire Happy, Wild, and Free.


Posted by Ernie J. Zelinski at Friday, January 25, 2019 No comments: Links to this post 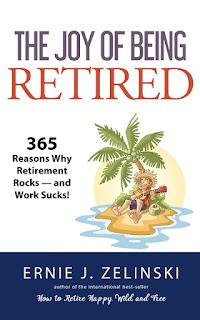 This is the front cover of my new book The Joy of Being Retired: 365 Reasons Why Retirement Rocks — and Work Sucks! It actually has 50 Bonus Reasons for Why Retirement Rocks — and Work Sucks! for a total of 415 Reasons. Each of the reasons has an accompanying cartoon image so this book is a little different than my two other bestselling retirement books. Just to let you know that the POD (Print on Demand) edition of The Joy of Being Retired is as of today available on Amazon.com and Amazon.ca. I just ordered 2 copies from Amazon.ca.

At Amazon.com, you can order a copy here:

The Joy of Being Retired on Amazon.com

At Amazon.ca, you can order a copy here.

The Joy of Being Retired on Amazon.ca:

Heck, if you order a copy in the next 24 hours and pay for express shipping, you may get the copy before I get my 2 copies. I am also doing a print run of 1,700 copies of a traditional offset print run but these won't be available until the third week of January. (Two financial advisors have already ordered 200 copies each to give to their clients.)

To my special friends and clients, I will be giving you a complimentary signed copy or sending you a copy of the traditional offset print copy once I get them.
Posted by Ernie J. Zelinski at Thursday, December 20, 2018 No comments: Links to this post 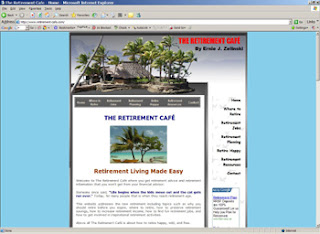 A long time ago I learned from some of the top Internet marketing gurus such as Tom Antion that ugly websites can attract a lot more traffic and make a lot more money than professionally designed websites. (Of course website designers wanting to charge you thousands of dollars for a website that will be a total waste of money don't want you to know this.)

In June my "Retirement Cafe" website was the number 2 listing on "Top 55 Retirement Planning Websites" awards by GoldRetiree.com.

Incidentally, I designed the "Retirement Cafe" website using a cheap website design program that cost $175. I used that same program to design about 15 other websites, including the "Retirement Quotes Cafe". Not so long ago someone offered me $15,000 for the "Retirement Quotes Cafe" — I declined because I didn't want anyone messing around with the design. Ultimately, it's not how pretty the website looks that counts — it's the quality of the content that you have on the website that makes the difference and ends up making you the big money.

Furthermore in July the Washington Post mentioned the "Retirement Cafe" as one of the better websites in an article titled "Best web sites for boomers and retirees":

Again, I make the point that ugly websites can attract a lot more traffic and make a lot more money than professionally designed websites. The Washington Post states the "Retirement Cafe" is "Not as pretty and polished as some of the others, but packed with information and links . . ."


Incidentally, not that long ago Seth Godin, one to the top marketing gurus in the world, wrote a brief blog post about how pretty websites are often not as effective as the not-so-pretty (ugly) ones.

"Pretty websites ... are rarely websites that convert as well as unpretty ones . . . it's a mistake to also expect your pretty website to generate cash, to have the maximum percentage of clicks, to have the most efficient possible funnel of attention to action."

You can also check the Best Retirement Websites on the Retirement Cafe.


Posted by Ernie J. Zelinski at Monday, October 31, 2016 No comments: Links to this post

Things to Celebrate in October - Including Book Marketing 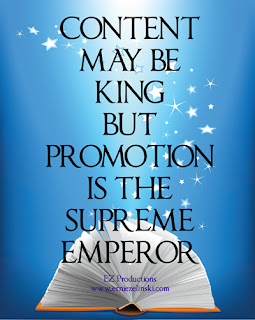 This October was the 35th anniversary of my being fired from my Engineering job for taking too much vacation. I have not had a regular job since then. These quotations apply:
"Hard work is no match for relaxed, creative action."
— from The Lazy Person's Guide to Success

"Those who make the worst use of time most complain of its shortness."
— Jean de La Bruyère

"Sometimes it’s important to work for that pot of gold. But other times it’s essential to take time off and to make sure that your most important decision in the day simply consists of choosing which color to slide down on the rainbow."
— Douglas Pagels

"The work ethic is a terrible mistake — a cute term gone haywire.
— from "The Lazy Person’s Guide to Success"

"If people knew what they had to do to be successful, most people wouldn't. "
— Lord Thomson of Fleet

"If you want the rainbow, you gotta put up with the rain."
— Dolly Parton

"If people knew how hard I worked to get my mastery, it wouldn't seem so wonderful at all."
— Michelangelo


What's more, in late October I did a tally and realized that my books have now sold over 900,000 copies worldwide since I started self-publishing in September 1989. That’s an average of 34, 615 copies per year over 26 years.
Still more, Book marketing guru John Kremer on Facebook said he was looking for more ideas for the new edition of his book “1,001 Ways to Market Your Books”. So I sent him a few of my marketing techniques — which I didn’t think he would use. Surprisingly (to me), he did a blog post about some of them:
http://bookmarketingbestsellers.com/ernie-zelinski-creative-book-marketing-strategies/
Of course, sending John Kremer some of my marketing techniques is another marketing technique of mine to get me publicity in the new edition of his book. As it turns out, I got publicity on his blog post too. Some more words of wisdom:
"A master in the art of living draws no sharp distinction between his work and his play; his labor and his leisure; his mind and his body; his education and his recreation. He hardly knows which is which. He simply pursues his vision of excellence through whatever he is doing, and leaves others to determine whether he is working or playing. To himself, he always appears to be doing both."
— Francoise Rene Auguste Chateaubriand
REPLY LINK
Posted by Ernie J. Zelinski at Monday, November 02, 2015 No comments: Links to this post

Did I Say That - Quotes by Ernie Zelinski 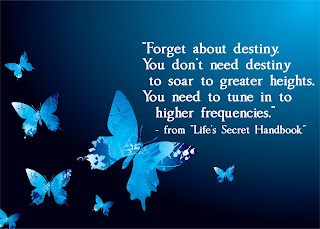 Just discovered this webpage (that I have nothing to do with).

I didn't know that I said all of these things — or at least I forgot that I said some of them!

Here are a few more quotations by yours truly (Ernie Zelinski) to add to those on that webpage:


"Around some people it's best to keep quiet
about what we know.
Fools care little about wisdom and will
resent us for sharing it with them.
It's sort of silly to try to delight the undelightable,
wouldn't you say?"
— from Life's Secret Handbook

"Before you climb over the side of the fence to
where the grass appears greener, try watering your
side first!"
— from The Lazy Person's Guide to Happiness

"Where is this incredible expansive
energy called "high intention"?
There is no place that it is not if that
is where you are coming from."
— from Life's Secret Handbook (Reminders for Adventurous Souls Who Want to Make a Big Difference in This World)

"Anything great that has been accomplished in the history of humanity has started with one small thought. We all have those thoughts; few people do anything with theirs, however. What do you intend to do with yours?"
— from Look Ma: Life’s Easy

"The best advice that anyone can give you for choosing a specific career is never to accept someone else's advice. Indeed, one of the biggest reasons for choosing the career you have chosen should be that no one told you to."
— from Career Success Without a Real Job
"Being unemployed is the true test of who you really are."
— from The Joy of Not Working


Posted by Ernie J. Zelinski at Wednesday, July 15, 2015 No comments: Links to this post