Things To Do When You Retire - A New Retirement Book 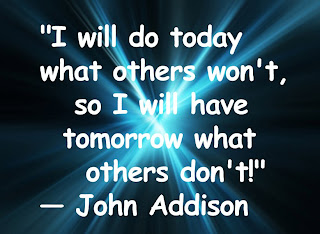 I'm writing to invite you to contribute to a new book we are publishing next spring entitled 65 Things To Do When You Retire, a collection of essays offering advice and reflections on how to make the retirement years fulfilling. We'd love for you to contribute an essay to share your retirement expertise. This book is the ninth in a very successful series we launched five years ago. All royalties from the sales of the books in the series are donated to various charities. The royalties from 65 Things To Do When You Retire will be donated to various local, national, and international nonprofit organizations dedicated to preventing and curing cancer.

The concept behind the book series is straightforward: ask well-known authors, celebrities, businesspeople, physicians, and other experts/public figures to contribute essays about a specific topic on a pro-bono basis, collect their essays into a book, publish the book, and donate all of the royalties to charity.

The series has been successful beyond our wildest dreams. More than 300 notables from all walks of life have contributed essays thus far, including Garrison Keillor, Diane von Furstenberg, Bill Gross, Erica Jong, Muhammad Yunus, Tom Hanks, Ken Burns, Harold Prince, David McCullough, Thomas Friedman, Barbara Kingsolver, and many, many others. Last year our charitable contributions from this project exceeded $100,000, and the royalties are increasing with each year.

For 65 Things To Do When You Retire, we are seeking to collect insightful and inspiring essays about retirement that include firsthand experiences, practical advice, opinions, recommendations, and observations that will help new or soon-to-be retirees make the most of the rest of their lives. We are asking each contributor for an essay of 1,000 words (4 typewritten pages), along with a short bio (100 words) that we can use in the book.

We would be honored to count you as one of the contributors to 65 Things To Do When You Retire. If you don't have the time to write an essay, but have written something previously that is relevant to the focus of this book, please consider allowing us to include it. We will need to receive your essay by October 15, 2011.

Thanks very much. We look forward to hearing from you!

Of course, I semi-retired when I was a kid and became very good at it. That's why I now get paid the big bucks for getting up late in the morning and then experiencing true freedom for the rest of the day. This along with the fact that my self-published How to Retire Happy, Wild, and Free is the best-selling retirement book on Amazon (and in the world) is why I got asked to contribute the chapter, which I already submitted.

Most people think that I am lucky to have gotten to where I am today, earning a better income than 95 percent of wage earners by working only 3 or 4 hours a day. Not true at all. This quote, which someone just posted on F.B., applied when I was writing my books and still apples today as I work on my creative projects that will bring me even more prosperity in the near future:

"I will do today what others won't, so I will have tomorrow what others don't!"
— John Addison

Keep the above quote by John Addison in mind if you want your retirement plan to turn out as good as my retirement plan. If you follow his advice you won't end up like so many American and Canadian baby boomers who have so little money saved for their retirement years.

Posted by Ernie J. Zelinski at Monday, August 22, 2011 No comments: Links to this post

Labels: best places to retire, fun things in retirement, retiring, things to do when you retire

How to Retire Happy, Wild, and Free as a Kindle Ebook? 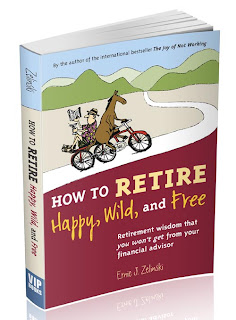 I just received another inquiry about whether How to Retire Happy, Wild, and Free will be available as a Kindle ebook.

This was my response:

I have not as yet had How to Retire Happy, Wild, and Free or any of my books published on ebooks for the Kindle because the Kindle is not all that conducive to my books. Most of my books are hard to format for the Kindle and would definitely lose a lot of impact versus the paper edition.

I may eventually publish some of my books on the Kindle including How to Retire Happy, Wild, and Free if Amazon ever comes up with a way of neatly incorporating diagrams and quotations on the sides of the pages as are presented in the paper edition.

Thanks and so long for now,

Posted by Ernie J. Zelinski at Monday, August 08, 2011 No comments: Links to this post 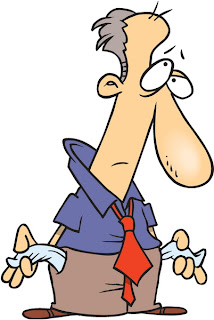 Here is a quotation that someone just posted on Facebook:

"The truth that sets men free is for the most part the truth which men prefer not to hear."
— Herbert Agar

Indeed, there are many truths that people don't want to hear.

For example, most Americans don't want to hear, as Newsweek stated, that the Nation as a whole has been complicit in a fraud. That is why it has such a debt problem and economy. Yet, depending who it is, most people will blame either Obama, George Bush, the Democrats, the Republicans, the banks, corporations, the unions, etc. These people will never blame themselves as a big part of the problem.

The same is the case with many Americans who now don't have enough money for retirement. Again, they will blame the various subjects above. And again, they won't blame themselves. But the reason they are broke in retirement and won't be able to do fun things in retirement can be explained in and by the title of Larry Wingate's book You're Broke Because You Want to Be. Of course, this is a truth that people don't want to hear and is a great way to achieve the goal of how to not retire rich.

Here is another truth people don't want to hear:

"Winners have simply formed the habit of doing things losers don't like to do."
— Albert Gray

Have your ever wondered how certain people get through life, let alone plan for retirement.

To make my point, here is an e-mail that I received from a reader of one of my books:

ernie enjoy both your retirement books i have a question i am retired now want to move to fla lease then buy i like to exericse and play the horses but because of ptsd have not left n.j. in 18 yrs tired of cold tried sites on laptop also new to that how to i start everytime i ask i got sell people in this market calling all the time sure i by a map i do not drive would to be by a good casino lease condo with running track and poool no beach thanks again love the books vinnie

The writer of the e-mail simply does not understand the concepts of decency, class, and excellence. Why would I reply to someone with such horrible writing skills? I am not big on perfection myself but people should learn to have respect for the people to whom they are sending e-mails.

Speaking of deceny, here is an e-mail that I just sent to someone who has taken a lot of the content off my retirement website and posted it on his.

The retirement poem "Making the Most of Retirement" by Dave Erhard on your Squidoo Lens is one that you took off my webpage The Retirement Poems Cafe.

I am asking you to remove it immediatley.

If you do not do so, I will ask Squidoo to do it.

Posted by Ernie J. Zelinski at Friday, August 05, 2011 No comments: Links to this post