Perhaps You Don't Need Any Money for Your Retirement 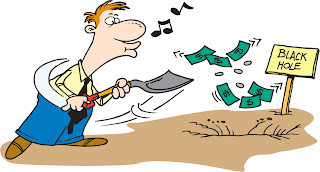 If you have purchased How to Retire Happy, Wild, and Free and are now looking for great retirement quotes, go to The Retirement Quotes Cafe.

Now that you are retired, perhaps you don't need any money for retirement and can avoid debt management altogther.

Let me tell introduce you to a guy who has proven to himself that "money is an illusion."

He is a true 1 percenter who I really admire, a guy who is committed to what he believes in (unlike 99 percent of people who say they believe in something but their actions say otherwise).

“I know it is possible to live with zero money — Abundantly.”
— Daniel Suelo

If you don't want to purchase the book at the above link, first, read this article that was in a recent issue of the Globe and Mail.

Daniel Suelo's philosophy is really interesting. For example, he says that if he ever comes across any money on the street, he just walks on by without picking it up.

In short, a guy who walks the talk. But enlarge the photo of him on the Globe and Mail webpage and it says:

"Living in caves outside Moab, Utah, Daniel Suelo lives off of foraged plants, road kill and dumpster contents. He refuses to accept or spend currency."

Not a way I want to live but I admire the guy for his dedication to what he believes in.

Here are a few quotes about money to keep it in proper perspective so that it enhances your retirement and so that you don't need a retirement job:

"Money is good for bribing yourself through the inconveniences of life."
— Gottfried Reinhard

"Money will appear when you are doing the right thing in your life."
— Michael Phillips

"Charity begins at home, but should not end there."
— Thomas Fuller

"Money is good for bribing yourself through the inconveniences of life."
— Gottfried Reinhard

"You are only as rich as the enrichment you bring to the world around you."
— Rajesh Setty

"One of the great astonishments of my life has been the discovery that actually you don’t need money to travel. You need enough credentials to get paid to travel.
— Gregg Levoy"

"People who don't have money, but dream about the day they'll hit it big, all too often are expecting something from financial excess that it can't bring them."
— Robert J. Ringer

Posted by Ernie J. Zelinski at Tuesday, March 13, 2012 No comments: Links to this post