Retirement in the Recession Delayed 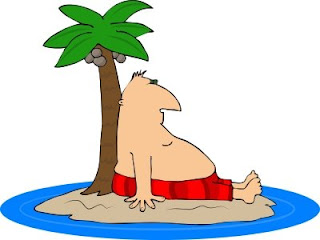 So much for stupid government stimulus packages - 82 percent of Americans say they will use upcoming tax relief for savings or to pay down debt.

In fact, even after the recession ends, Americans said their spending will return to just 86 percent of pre-recession levels, according to a survey released today.
The drop in spending drop translates into more than $1 trillion annually, in GDP.

On the retirement front, survey participants estimated that their retirement savings have dropped an average of 25 percent, whereas 22 pecent said they now plan to retire later than previously expected.

The anticipated retirement age jumped 3.6 years to older than age 65. When asked why they now expected to retire later, 30 percent claimed it was the loss of savings.
Posted by Ernie J. Zelinski at Monday, March 30, 2009 1 comment: Links to this post

A Retirement Career Is a Real Good Life 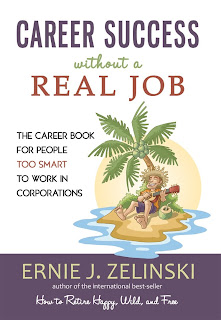 The image above is the cover of my book Career Success Without a Real Job: The Career Book for People Too Smart to Work in Corporations:
Here are some of the topics from Chapter 1: Life Without a Real Job Will Set You Free
And here are the topics in Chapter 2: Unreal Jobs — So any Worlds; What to Do?
Posted by Ernie J. Zelinski at Thursday, March 19, 2009 No comments: Links to this post

Retirement Quotes about Where to Retire

What's the good of a home if you are never in it?
— George and Weedon Grossmith, The Diary of a Nobody

Although very few people are actually called upon to live in palaces, a very large number are unwilling to admit the fact.
— Osbert Lancaster

All I need is room enough to lay a hat and a few friends.
— Dorothy Parker

A swell house with . . . all the modern inconveniences.
— Mark Twain

The premises are so delightfully extensive, that two people might live together without ever seeing, hearing, or meeting.
— Lord Byron
Retirement Quotes about Retirement Health

(So Many Fat Americans — No wonder) The civilized man has built a coach, but has lost the use of his feet.
— Ralph Waldo Emerson

I feel as I always have, except for an occassional heart attack.
— Robert Benchley

Check out my books at Ernie Zelinski's Books

Posted by Ernie J. Zelinski at Sunday, March 08, 2009 No comments: Links to this post

U.S. Debt - The Clucking Hen from Hell That Will Interfere With Your Retirement 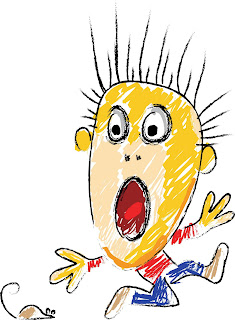 If you are an American, do you think your government will be able to pay your Social Security benefits during your retirement life?

Go to this website and you can see the US Debt accumulate.

Interestingly, with the US debt is 10 trillion, and the US population is 300 million, this leaves a national debt (not counting state debt) of $33,000 per American citizen.

But my estimate is that only about a third of the population (excluding retirees, children, and low income earners ) are significant income earners and tax payers.

This means a national debt of about $100,000 per significant taxpayer.

Hmm . . . . do you think that there is a problem here with paying this debt off?

Both Debt and Greed are coming back to roost like the clucking hen from hell.
Posted by Ernie J. Zelinski at Tuesday, March 03, 2009 No comments: Links to this post